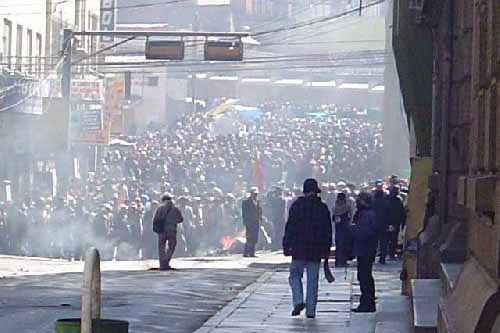 Protests on the streets of La Paz turned violent on Friday, as angry miners pushed against a police line in their advance towards government headquarters, Guardian reported.

This is the ninth day the miners have been protesting against what they believe is a lack of development in the Potosi region. They want President Evo Morales to fulfil a promise to develop the area.

Hector Alias Copa, the leader for mine workers in the area said Potosi wanted industrialisation and more sources of work, but that the government did not understand their needs.

There were also reports of rocks being thrown at the protesters by police. Local media say four people were injured in the violence, and ten people arrested. Potosi is a rural area of the country known for its mining resources. It is also one of the highest cities in the world. But miners feel they are lagging behind the rest of the country.

New York surges ahead of Brexit-shadowed London in finance
US 27 January 13:37