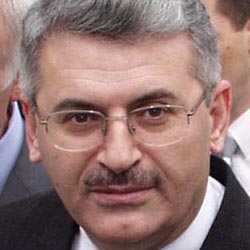 Turkish-Syrian relations will never reach breaking point because it is not easy to break off relations with neighbouring countries, Transport Minister Binali Yildirim told reporters on Friday, the newspaper Haberturk reported.

Mr Yildirim noted that customs restrictions taken in relation to Syria are the answer for the Turkish side such as some trade sanctions being imposed.

"These restrictions will hurt only Syria," Mr Yildirim said.

Turkish Minister of Customs and Trade Hayati Yazychy said that Turkey will increase the tax on the Syrian goods by 30 per cent under the sanctions.

Among other restrictions the minister called for a prohibition on the entry of Syrian vehicles whose serviceable life exceeds 20 years.

Anti-government demonstrations did not stop for more than eight months in Syria. According to UN statistics, the number of victims is more than 4000. There are more than 1500 dead on both sides, including 1100 law enforcement officers the Syrian authorities say.