Erdogan: US has only two weeks to fulfill its promises 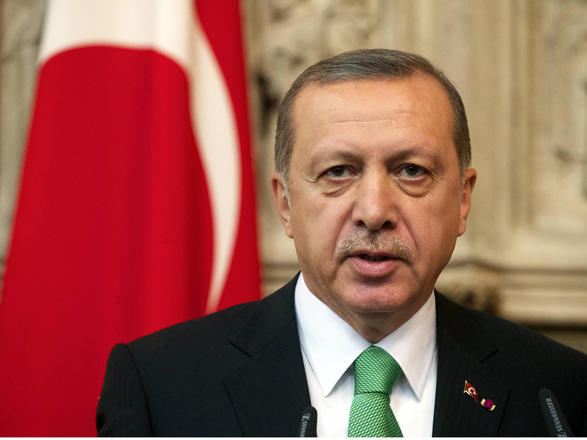 Turkey has run out of patience as a result of the US promises about leaving Syria’s northern regions soon, and in particular, Manbij, Turkish President Recep Tayyip Erdogan said.

“If the US does not fulfill its promises within the next two weeks, then Turkey will launch new anti-terrorist operations in northern Syria,” Erdogan added, Trend reports referring to the Turkish media.

"We are not afraid of the US sanctions and Turkey will create a security zone in northern Syria," the president said.

On Dec. 12, 2018, Turkish President Recep Tayyip Erdogan said the Turkish Armed Forces will launch a new military operation in Syria against PYD/YPG. Erdogan claimed there were US soldiers in the detachments of the terrorists in Syria.

The security zone in northern Syria consists of an area of 32 kilometers and a length of 460 kilometers along the Syrian-Turkish border. In case of the creation of this zone, it will be divided into two parts, the first part will start from the Iraqi-Syrian border and will be extended to the Syrian city of Qamishli, because the Syrian government forces control this city.

The second part of the security zone will start from Qamishli and will be extended to Jarabulus city, which was liberated from the terrorists of the “Islamic State” (IS) as part of the Operation Euphrates Shield conducted by the Turkish Armed Forces in 2016.

Manbij city, where Turkey had previously intended to conduct new anti-terrorist operations, will not be a part of the security zone.

US secretary of state to visit Kazakhstan
Kazakhstan 13:51