France to assist Azerbaijan in implementation of satellite resources

The French "Airbus Defence and Space" ("EADS-Astrium") company will engage in the implementation of the satellite resources of Azerbaijan.

The executive vice president of space systems of the "Airbus Defence and Space" François Auque made the remarks at the meeting of the French delegation with the Azerbaijani Minister of Communications and High Technologies Ali Abbasov.

Azerbaijan has a great interest in the space sector, including the implementation of satellite resources, he said.

The executive Vice President said that one of the main aspects of cooperation between Azerbaijan and France, which agreed in the Memorandum of Understanding signed between "EADS-Astrium" and "Azerkosmos" JSC is precisely the sphere of realization of satellite resources.

He noted that the parties bind with both commercial interests and the existing potential of strategic cooperation in this field.

"EADS-Astrium" company also offered services on education of Azerbaijani specialists in the field of satellite control.

Azerbaijan's first telecommunications satellite "Azerspace/Africasat-1a" was delivered into orbit in February 2013 with the Ariane 5 ECA launcher of French "Arianespace" company. One of the "Arianespace" shareholders is "EADS-Astrium".

As Abbasov said earlier, the French "EADS-Astrium" also introduced to the JSC "Azerkosmos" its proposals on the creation of low-orbit satellite for Azerbaijan.

Earlier, director for export in the sphere of navigation of terrestrial observation and science Guy Limousin stated on the company's willingness to participate in the tender for the construction of a second telecommunications satellite of Azerbaijan - "Azerspace-2."

At present, Azerkosmos JSC also summarizes the tender announced for the construction of a universal ground station for receiving the Earth surface images from the satellites flying over this region.

A universal ground station equipped with a radar system with Synthetic Aperture Radar (SAR) will render the optical satellite services.

The Azerbaijani satellite operator is preparing a business plan for using the space radar and optical images in Azerbaijan and in the markets of regional countries.

Azercosmos regularly negotiates with the organizations that may become potential buyers of satellite images. The negotiations are informative in nature and designed to create a favorable atmosphere for future cooperation. 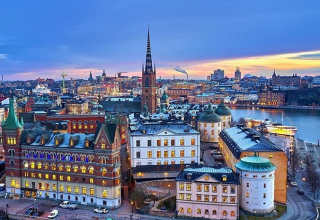 Around 5.2 pct of Spanish population infected by coronavirus: study