Within the "Month of Khojaly" in Ukraine, announced by the Youth Forum of the Organization of Islamic Cooperation and Azerbaijani Youth Union of Ukraine(OAMU), ceremony of remembrance of victims of the Khojaly genocide committed by Armenian armed forces 20 years ago was held in the city of Nikolayev.

The film "When words are not enough", filmed by the International News Agency Trend, was shown at the ceremony of remembrance, the Union told Trend on Saturday.

Viewers saw the documentary footage documenting the crimes of the Armenian military, genocide, ethnic cleansing and aggression of Armenia against Azerbaijan, which can be traced over the past two centuries.

Spokesman for the city of Nikolayev Ilona Karendo, chairman of the Russian community in Nikolayev region Tamara Belova, chairman of the Bulgarian community Denis Dzhelo and diaspora leaders of other nations who spoke after the viewing called the atrocities perpetrated in the town of Khojaly against civilians, including against children, women and elderly real genocide directed against the Azerbaijani people. They called on international organizations and the international community to give a legal and political assessment of this terrible crime against humanity.

Deputy Chairman of the Centre for culture and education named after Heydar Aliyev in the Nikolayev region Yunus Aliyev provided detailed information about acts of genocide, ethnic cleansing, deportation, and the aggressive policy of Armenia in the historical Azerbaijani lands over the past two centuries.

Secretary General of the Union Ayaz Salmanov, chairman of the organizing association of Nikolayev Hayyim Dunyamalizade and other compatriots spoke at the remembrance ceremony and expressed the belief that criminals will answer to history for their deeds. 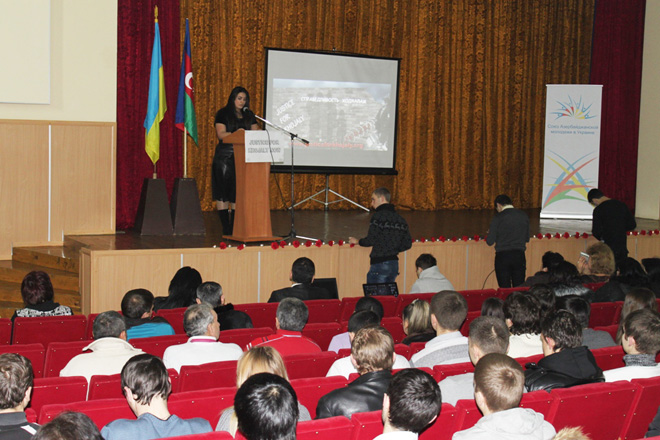