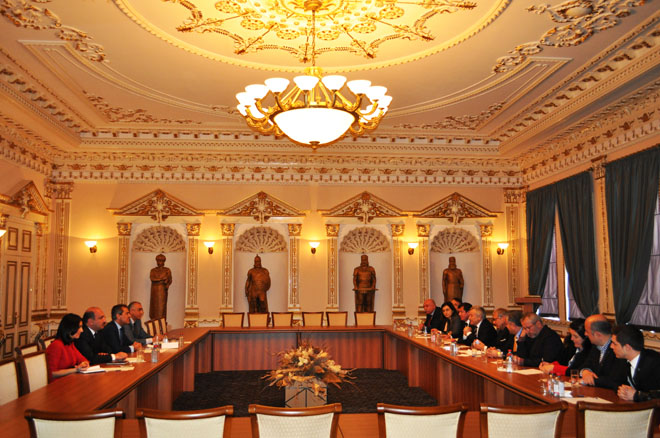 Azerbaijani State Committee on Work with Diaspora hosted a meeting on April 7 with a delegation from the Istanbul Chamber of Commerce.

He added that this shows that Azerbaijan and Turkey are fraternal states, which always support each other.

Turkish delegation member, MP from Justice and Development Party (AKP), Seyit Sertcelik, in turn said the visit's goal is to combine efforts in the fight against anti-Azerbaijani and anti-Turkish campaigns worldwide.

Mustafa Balkuv, the chairman of a special commission of the Istanbul Chamber of Commerce, spoke about the commerce chamber.

He said the organization with 350,000 members is the largest in Turkey and the world's fifth largest NGO.

Ozturk Oran, the delegation's head, who is also a board member at the chamber, said it is necessary to strengthen cooperation not only between the diasporas of the two states, but also between government organizations and NGOs, in order to fight against anti-Azerbaijani and anti-Turkish campaign in the world, as well as to bring the truth about Azerbaijan to the world and achieve recognition of Khojaly genocide.

During the meeting it was also decided to establish a commission consisting of Azerbaijani state committee's and commerce chamber's members and to develop an action plan.

Istanbul Chamber of Commerce delegation consisting of 12 people has been in Azerbaijani capital of Baku since April 4 and already held several official and unofficial meetings.