They exchanged views over the enhancement and strengthening of relations between Azerbaijan and the US.

They hailed good cooperation between Azerbaijan and the US in energy, security and peacekeeping, and other fields.

The sides noted the fact that relations between the two countries were built on solid foundations, saying the ties now entered a new level.

They expressed confidence that Azerbaijani-US cooperation would further expand and strengthen in all areas.

Negotiations over the settlement of the Armenian-Azerbaijani Nagorno-Karabakh conflict were also discussed at the meeting. 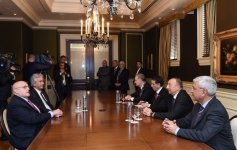