President of the Republic of Azerbaijan Ilham Aliyev has today attended the inauguration of a 100-seat orphanage-kindergarten in Saatli, the construction of which was initiated by the Heydar Aliyev Foundation.

The head of state cut the ribbon symbolizing the opening of the orphanage-kindergarten.

The construction of the orphanage-kindergarten started in May 2015 and ended in December 2016. The two-story building covers a total area of 942.6 square meters.

There are four groups and four bedrooms. All conditions have been created here. The building has a medical point, a canteen, a kitchen, a laundry, game and music halls. The orphanage-kindergarten will create 27 jobs.

Large-scale landscaping and redevelopment work was carried out and green areas were laid out around the building. 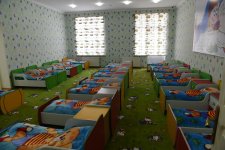 LNG demand to double over next 20 years