Azerbaijani Foreign Ministry's Head Jeyhun Bayramov received Italy's Ambassador Augusto Massari due to the completion of his diplomatic activities in Azerbaijan, the press service of the ministry told Trend on Apr.3.

Bayramov stressed that the cooperation between the two countries is at a high level, a vivid example of which was the signing of the strategic partnership declarations by their leaders.

The ambassador, in turn, positively assessed the attention paid to him during the diplomatic mission in Azerbaijan and the conducted cooperation. According to him, the solidarity showed by Azerbaijan and Italy fully corresponds to the high level of relations between the countries.

The parties noted available prospects for expanding cooperation in all areas and stressed the importance of mutual visits in this regard.

Highly appreciating the diplomatic activities of the Italian ambassador to Azerbaijan, the minister thanked him for his contribution to the development of relations between the two countries and wished him success in his future activities. 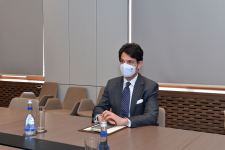