The Baku Declaration will make a great contribution to the development of relations between Azerbaijan and Turkey, Azerbaijani Foreign Minister Jeyhun Bayramov said, Trend reports citing the Azerbaijani Ministry of Foreign Affairs.

The minister made the remark in Baku during a meeting with the Chairman of the Grand National Assembly (Parliament) of Turkey Mustafa Sentop on July 28.

He noted with satisfaction the signing of the Baku Declaration following the meeting of the heads of parliaments of the three fraternal countries.

The minister expressed confidence that this event will contribute to the further development of cooperation, stressed that relations between the countries are of particular importance.

Bayramov recalled the meeting of the foreign ministers of the three countries in January 2021 in Islamabad.

He also assessed the visit of Turkish President Recep Tayyip Erdogan to Shusha and the adoption of the Shusha Declaration as a historic event.

"From the first day of the 44-day Second Karabakh War, the Azerbaijani people witnessed the support of the Turkish people, headed by President Recep Tayyip Erdogan, and we highly appreciate this," Bayramov said.

The foreign minister stressed that Azerbaijan feels and welcomes Turkey's full support for ensuring peace in the region.

In turn, Sentop stressed that the relations of friendship and brotherhood between the three countries will contribute to the well-being of peoples, ensuring peace and security in the region.

Speaking about the current situation in the region, he assessed the proposal of Azerbaijan to sign a peace treaty with Armenia as a very important step.

The Turkish Parliament speaker also noted the need for Armenia to transfer minefield maps to Azerbaijan.

During the meeting, a wide exchange of views took place on the agenda of cooperation between Azerbaijan and Turkey, including at the level of parliaments, as well as on the topic of regional security.

Cooperation on multilateral platforms and within international organizations was also discussed. 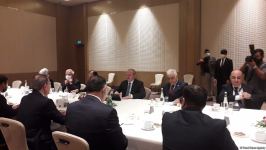