BAKU, Azerbaijan, October 6. Military attachés accredited to Azerbaijan visited a mass grave containing the remains of Azerbaijani servicemen in the Edilli village of Khojavand district upon the initiative of the Ministry of Defense of Azerbaijan and with the organizational support of the State Commission on Prisoners of War, Hostages and Missing Persons, on October 6, Trend reports.

Chief of the International Military Cooperation Department of Azerbaijan's Ministry of Defense, Major General Huseyn Mahmudov briefed the military representatives of foreign countries on the gross violations of the international humanitarian law principles by the Armenian armed formations and armed forces, which were illegally deployed in Azerbaijan's territory during the first Karabakh war.

The remains of 12 people were discovered at the mass grave site. The items found near the remains suggest the buried were servicemen whose hands and feet were tied before death.

Major General Mahmudov noted that the fate of nearly 4,000 civilians and prisoners of war who went missing as a result of the Armenian aggression remains unknown.

Later, military attachés paid a visit to the military unit and got acquainted with the conditions created there for the military personnel. 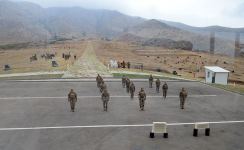