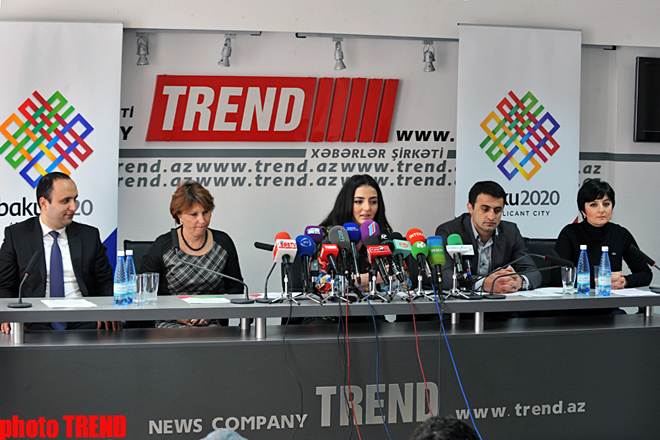 Azerbaijan launches the Republican campaign to support the candidacy of Baku to host the Olympic Games in 2020, executive director of the Organizing Committee Baku-2020 Konul Nurullayeva said during a press conference at Trend news agency's press-center today.

She said that people's support for the Olympic Games is required.

"This campaign intends to get one million or more signatures to support the Olympic Games," Nurullayeva said.

She said that a recent poll showed that most of the Azerbaijani population supports the Olympic Games.

The students will take part in the campaign, Chairman of the Azerbaijani Union of Student Organizations Shahin Ismayilov said at a press conference.
"About 39 universities and tens of thousands of our members will join this campaign," Ismailov said.

He said that student volunteers will also participate in the campaign.

If the games are held in Baku, the whole world will see that Azerbaijan differs from a sporting point of view and in terms of hospitality and friendliness, Olympic champion Zemfira Meftahetdinova said at a press conference.

Olympic champion Farid Mansurov said that the country's public wants the Olympic Games to be held in Baku.

Baku has created the Organizing Committee to promote its candidacy to hold summer Olympic Games in 2020.

Madrid, Tokyo, Istanbul and Doha put forward their candidates to hold the Olympic Games in 2020.

A decision will be made which of six cities to enter the next round at a meeting of the International Olympic Committee's Executive Board in April. This decision will be officially announced in the Canadian city of Quebec on May 20 - 25.