The Azerbaijani government's commitment to hosting the first European Games in 2015 has been unwavering and their involvement in the plans and progress is welcomed, the President of the European Olympic Committee Patrick Hickey said at a press-conference in Baku on Tuesday.

According to him, great progress was made on preparation, the work of the Organizing Committee is carried out in accordance with the schedule.

Hickey stressed that the success of these games will belong both to Azerbaijan and Europe.

The Azerbaijani Minister of Youth and Sports Azad Rahimov in turn said that great progress was achieved in a short time.

"We can confidently say that the Olympic Games of 2015 in Baku will play a great role in the history of the world sport," he said.

According to him, the work process shows that all issues will be resolved in a timely manner.

"Some 80-90 per cent of sport equipment will be ready by the late 2014. We attach very great importance to these games and will try to make it so these games are remembered in Azerbaijan's sport history," the minister said.

According to him, the facilities that are being built for the Games are for Azerbaijan's future.

"Competitions on some kinds of sport will be held in Baku for the first time, that is to say the Azerbaijani youth will become familiar with new kinds of sport and this will create conditions for development of these kinds of sport in our country," Azad Rahimov said.

The minister stressed that the Olympic Stadium able to place 65,000 people and a large swimming complex will be commissioned from February 1 , 2015.

According to him, Azerbaijan wants to put the start of a tradition with these games.

"This is the greatest event in Azerbaijan's sport history, therefore, alongside with infrastructure, we want to achieve progress in all spheres in the country," the minister said. 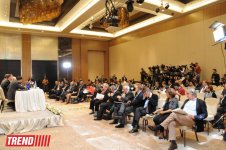