The General Assembly of the European Olympic Committee (EOC) held in Baku, Azerbaijan on Nov.21-22 has been exemplary, EOC President Patrick Hickey said.

He made the remarks at a press conference following the assembly.

"We just concluded a general assembly here in Baku and we are extremely happy at the conditions that we operated," he said.

Hickey also noted on behalf of the European Olympic Committee, that Baku was the best partner for the launch of the first inaugural European games.

"As they said earlier, they're doing a fantastic job in the preparations, and it will leave a tremendous legacy in this city for the future sports events, not only in terms of infrastructure, which is amazing, as well as the legacy that you will have on your citizens," Hickey said.

He went on to add that Azerbaijan has so many volunteers, so many Azerbaijani citizens working with experts and professionals that have come in mainly from the London Olympic Games.

Hickey said that it will leave a very strong legacy, whereby Baku will be prepared in the future to hold the similar sports games.

"We love to see local people being involved, getting expertise that they might not normally have," Hickey said.

He went on to say that the upcoming games will be tremendous.

"To remind you, we are the only continent without our own games," Hickey said. "So there is great interest, great goodwill attitude to Europe, to get our games up and running, and we are already receiving great help from our colleagues in Asia, Africa and Pan-America."

Hickey went on to say that EOC has a presentation from BEGOC, the organizing committee for the European games, which was tremendous.

"We are extremely happy and pleased with the situation," Hickey said. "Bear in mind that most Olympic cities have a 7-year time to prepare for the games, and what BEGOC is doing is extraordinary. It's all being telescoped into two years, and the progress they're making, and will make is truly amazing."

Speaking about the next European games in 2019, Hickey said the negotiations are held with six cities in Europe.

"If you remember, when we conceived the idea of these European games, it was six years ago, at the general assembly in Valencia, Spain. We said we would be extremely innovative in our thinking of these games, and that we would not enter process it like the formats of the Olympic games, we would have disciplines, which are non-olympic, and we are following all that," Hickey said.

"Our attitude is that we will tailor-make the games to the city that is most interested," he said. "We will announce the city before may of next year, possibly, it could be announced before that." 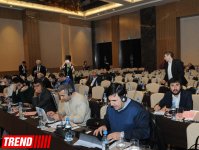