President of the Republic of Azerbaijan Ilham Aliyev has attended the opening of a new building of Ujar district Central Hospital.

The president cut the ribbon symbolizing the opening of the hospital.

It was noted that the hospital occupies a total area of 4.4 hectares. The two-storey complex, which consists of 4 blocks, was built in the 1.2 hectare area of this territory. The hospital complex was constructed on the initiative of the Heydar Aliyev Foundation.

President Ilham Aliyev reviewed the conditions created in the facility. Photo stands reflecting National Leader Heydar Aliyev's, President Ilham Aliyev's and Azerbaijani First Lady Mehriban Aliyeva`s care and attention to the development of healthcare in the country were installed there.

After reviewing the hospital, President Ilham Aliyev gave instructions and recommendations to ensure the provision of quality services. 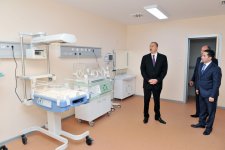