The Azerbaijani State Agency of Automobile Roads is carrying out the large-scale work on the construction and reconstruction of road infrastructure in the Azerbaijani territories liberated from the Armenian occupation on behalf of President of Azerbaijan, Supreme Commander of the Armed Forces Ilham Aliyev, Trend reports with reference to the state agency.

It is also planned to build a new highway with a length of 17 km from Khanlig settlement to Gubadli town.

Both highways will be built taking into account the development plan of the Nagorno-Karabakh region upon the instructions of the president. The highways will have four lanes and correspond to the first technical category.

To speed up the construction, a camp was built near Khanlig settlement, on the territory of which an asphalt concrete plant, an office for workers, a special area for vehicles, mechanisms and their maintenance, a canteen and places for recreation will be located.

The new Khudaferin-Gubadli-Lachin and Khanlig-Gubadli highways will pass through Zangilan, Gubadli and Lachin districts liberated from the Armenian occupation.

This highway project is part of the unified transport concept of the Nagorno-Karabakh region. 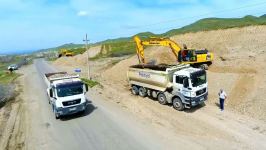 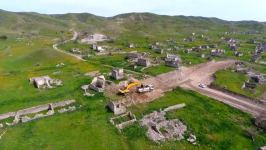