The document was signed by the Chairman of the Board of the Agency for the Development of Small and Medium-Sized Enterprises (SMEs) Orkhan Mammadov and Ayed bin Hadi Al Otaibi, deputy governor of the general authority for investment and investment development, during the 5th meeting of the Azerbaijan-Saudi Arabia Intergovernmental Commission in Baku.

The protocol also provides for the expansion of cooperation in the field of culture and sports.

The 5th meeting of the Azerbaijan-Saudi Arabia Intergovernmental Commission is being held on March 4, 2019 in Baku.

Issues of cooperation in such areas as economy, trade, investment, IT, culture, sports, agriculture, food security, employment, health, tourism, and education, among others, will be discussed during the meeting.

The current state of economic relations between the countries, as well as the work carried out after the fourth meeting of the intergovernmental commission will also be among the topics of discussion during the meeting. 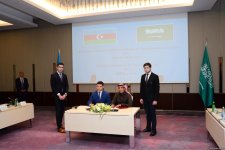 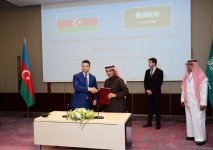