Relations between NATO and Azerbaijan have very good history, history of success, President of Azerbaijan Ilham Aliyev said at a joint press conference with NATO Secretary General Anders Fogh Rasmussen in the Alliance`s Headquarter in Brussels.

"And since early 1990s Azerbaijan has been very active in its aspirations to integrate into Euroatlantic institutions. And we made a big progress in that respect. We conduct reforms in our armed forces and I`m trying to bring them in accordance with NATO standards. Therefore this part of our cooperation already has very important impact on the situation on our armed forces," President Aliyev said.

He said participation in NATO operations in various parts of the world also helped our servicemen to increase their capability and to learn from NATO colleagues a lot.

"We were from the very beginning in Afghanistan, and as the Secretary General mentioned we provide all flights, land transportation. And I`m very glad that importance of Azerbaijan as a transit country for cargoes to Afghanistan is growing. Today we discussed our future activity in this respect, and we are ready to consider new proposals in order to expand our cooperation in this area," President Aliyev said.

He said the country will provide its military servicemen to serve in Afghanistan.

"And this is also part of or commitment as far as the ISAF operations are concerned. Today I also informed Mr. Secretary General that we are seriously considering to contribute to Afghan national army trust fund, and to consider in the future continuation of this financial contribution. At the same time, we provide trainings for Afghan diplomats in our Diplomatic Academy and in our Border Security academy. And we work on demining and other humanitarian issues, and are ready to expand our cooperation," President Aliyev said.

He underscored that the sides also discussed the regional security issues, particularly situation with respect to negotiations on Nagorno-Karabakh settlement.

"I informed Mr. Secretary General of the current status of these negotiations and once again expressed our hope that the conflict will be resolved as soon as possible and territorial integrity of Azerbaijan will be restored. There is a very good legal basis for that. The United Nations Security Council adopted four resolutions demanding an unconditional and immediate withdrawal of the Armenian troops from occupied territories, and we expect Armenia to comply with these resolutions," President Aliyev underlined.

He said part of the discussions was devoted to energy security.

"This is very important element of national security of countries, both producers and consumers. And Azerbaijan is becoming, and I`m sure will become, a substantial contributor to European energy security, and our consumers in Europe will be member states of NATO. Therefore this is also part of our overall discussions and consultations. Once again I would like to express my gratitude to Mr. Secretary General for invitation, satisfaction with the way how our relations are developing and transforming, and hope that these relations will continue successfully and will be based on mutual interests and shared values," he said. 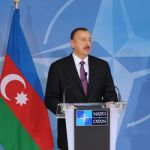