( AP ) - Youths rampaged for a third night in the tough suburbs north of Paris and violence spread to a southern city late Tuesday as police struggled to contain rioters who have burned cars and buildings and - in an ominous turn - shot at officers.

A senior police union official warned that "urban guerrillas" had joined the unrest, saying the violence was worse than during three weeks of rioting that raged around French cities in 2005, when firearms were rarely used.

Bands of young people set more cars on fire in and around Villiers-le-Bel, the Paris suburb where the latest trouble first erupted, and 22 youths were taken into custody, the regional government said. In the southern city of Toulouse, 20 cars were set ablaze, and fires at two libraries were quickly brought under control, police said.

Despite the renewed violence, France's prime minister said the situation was calmer than the two previous nights. About 1,000 officers patrolled trouble spots in and around Villiers-le-Bel on Tuesday, he said.

The government was striving to keep violence from spreading in what was shaping up as a stern test for new President Nicolas Sarkozy. The unrest showed anger still smolders in France's poor neighborhoods, where many Arabs, blacks and other minorities live largely isolated from the rest of society.

The trigger was the deaths Sunday of two minority teens when their motorscooter collided with a police car in Villiers-le-Bel, a blue-collar town on Paris' northern edge.

Rioting and arson quickly erupted after the crash. The violence worsened Monday night as it spread from Villiers-le-Bel to other impoverished suburbs north of the French capital. Rioters burned a library, a nursery school and a car dealership and tried to set some buildings on fire by crashing burning cars into them.

Officials have pledged tough punishments for rioters: Eight people were convicted Tuesday in fast-track trials and sentenced to 3-10 months in prison, the regional government said.

"The situation is under control," said Denis Joubert, director of public safety for the region surrounding Villiers-le-Bel.

Prime Minister Francois Fillon, who was briefed by police in Villiers-le-Bel, said things were "much calmer than the previous two nights, but we feel that things are still fragile, and we need a large preventative force on the ground so that what happened last night does not happen again."

Patrice Ribeiro of the Synergie police union said rioters this time included "genuine urban guerrillas," saying the use of firearms - hunting shotguns so far - had added a dangerous dimension.

One rioter with a shotgun "was firing off two shots, reloading in a stairwell, coming back out - boom, boom - and firing again," said Gilles Wiart, No. 2 official in the SGP-FO police union.

Youths, many of them Arab and black children of immigrants, again appeared to be lashing out at police and other targets seen to represent a French establishment they feel has left them behind.

"I don't think it's an ethnic problem," Wiart said. "Most of all it is youths who reject all state authority. They attack firefighters, everything that represents the state."

Suspicion of the police runs high among people in the drab housing project where the two teenagers died in the crash. The boys were identified in French media only by their first names, Lakhami, 16, and Mouhsin, 15.

There have long been tensions between France's largely white police force and the ethnic minorities trapped in poor neighborhoods.

Despite decades of problems and heavy state investments to improve housing and create jobs, the depressed projects that ring Paris are a world apart from the tourist attractions of the capital. Police speak of no-go zones where they and firefighters fear to patrol.

"The problem of bad relations between the police and minorities is underestimated," said criminologist Sebastian Roche.

Sarkozy, speaking from China, appealed for calm and called a security meeting with his Cabinet ministers for Wednesday on his return home.

Sarkozy was interior minister, in charge of police, during the riots of 2005 and took a hard line against the violence. He angered many in housing projects when he called delinquents there "scum."

The rioting youths "want Sarkozy - they want him to come and explain" what happened to the two teenage boys, said Linda Beddar, a 40-year-old mother of three in Villiers-le-Bel. Beddar woke Tuesday to find the library across from her house a burned-out shell.

The violence two years ago also started in the suburbs of northern Paris, when two teens were electrocuted in a power substation while hiding from police. The government is keen to keep the new violence from spreading.

In Villiers-le-Bel late Monday, arsonists set fire to the municipal library and burned books littered its floor Tuesday. Shops and businesses were also attacked, and more than 70 vehicles were torched, authorities said.

Several hundred youths organized in small groups led the rioting in Villiers-le-Bel, and incidents were also reported in five other towns north of Paris, the regional government reported.

It refused to give specific figures on injuries among the police, rioters or other civilians, or the numbers of cars and buildings set on fire, saying it feared that doing so would encourage youths to try to wound more officers and destroy more property. 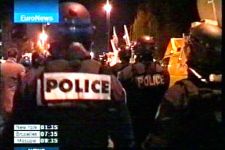