Other News Materials 3 December 2019 23:53 (UTC +04:00)
"If the increasing number of HIV cases in Brunei is not addressed immediately, it is feared that the number will further increase, which will defeat the country's goal of eradicating AIDS by 2030" 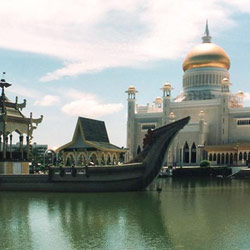 "If the increasing number of HIV cases in Brunei is not addressed immediately, it is feared that the number will further increase, which will defeat the country's goal of eradicating AIDS by 2030", Haji Mohd Isham, Brunei's health minister was quoted as saying on the occasion of World Aids Day 2019, Trend reports citing Xinhua.

According to local daily the Borneo Bulletin on Tuesday, the health minister said Brunei has health centers and hospitals across the country that can detect HIV infection and provide ART (antiretroviral therapy) treatment, which although may not completely cure the infection, it can strengthen the immune system of the patient against other infections and enable the patient to have a normal life.

"The total number of HIV infections in Brunei Darussalam since the country recorded its first case of HIV in 1986 is 278. The total number of reported deaths related to HIV/AIDS since 1986 is 59, while the number of people living with HIV today is 219", the country's Head of the Disease Control Division at the Department of Environmental Health Services Justin Wong said.

"If an individual receives an early examination, treatment can be carried out as soon as possible, to stop the HIV infection and increase the opportunity and possibility of the person to carry on living his or her normal life," Haji Mohd Isham said.

The minister pressed on the important role of family members and communities in curbing the stigma and discrimination against people with HIV.

The health minister also called for the strengthening of HIV screenings, along with preventive education and practices, particularly among high-risk groups.