President of the Republic of Azerbaijan Ilham Aliyev has attended the opening ceremony of a new office building of the Agdash district branch of the New Azerbaijan Party (NAP).

The head of state cut the ribbon symbolizing the opening of the building.

Nationwide leader and founder of the party Heydar Aliyev said: "The New Azerbaijan Party is a party of the past, of the present and of the future."

Today, the validity of this idea is even more obvious. The New Azerbaijan Party is making a very important contribution to the progress of our country and state building on a strong foundation.

Today, party ranks are expanding, while its activities are entering a new phase, which is certainly explained by the respect and reputation this political structure enjoys in society.

Underlying the successful activity of the New Azerbaijan Party in the name of common goals and ideas are its regional branches. Office buildings of district NAP branches under construction in all regions of the country not only have a modern appearance, but also multiply the beauty of their cities.

These buildings have all the conditions for productive work.

The office building of the Agdash district branch of the New Azerbaijan Party is quite important from this point of view. Thanks to an original design and an interesting architectural solution, the building imparts further beauty to Agdash.

President of Azerbaijan was informed that the construction of the two-storey building consisting of 17 offices began in August 2012. The building is fitted with modern appliances and equipment.

In the lobby, there is a bust of great leader and founder of the party, Heydar Aliyev. There are interesting photos reflecting the activities of the nationwide leader and President Ilham Aliyev related to the New Azerbaijan Party. There is an assembly hall for conducting various activities. Offices are located on the second floor of the building.

The head of state gave relevant instructions and recommendations. 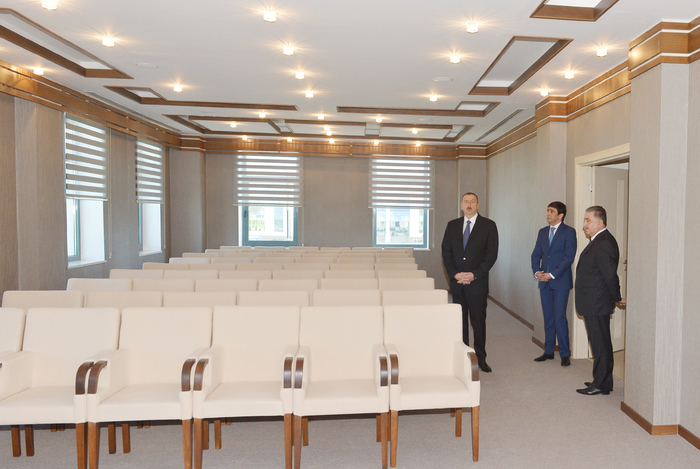