The restoration of houses and facilities destroyed or damaged as a result of missile and artillery attacks from the Armenian armed forces during the 44-day Second Karabakh War [from late Sept. to early Nov.2020] in Azerbaijan is almost completed, the Karabakh bureau of Trend said.

During its visit to the Fuzuli and Jabrayil districts [liberated from Armenian occupation in the 44-day war], the bureau got acquainted with the conditions created in the restored buildings.

The owners of houses and objects said that right after the end of the war, the government agencies began repair and restoration work, which was rapidly carried out and has already been completed. Most of the citizens have already moved into the restored houses, in which all the conditions necessary for life have been created.

The citizens expressed their gratitude to the state for the care and attention provided, stressed that the Azerbaijani state always supports them and thanked the country's leadership for this.

As a result of the Armenian aggression, more than 13,000 houses were damaged in 11 cities and districts of Azerbaijan. As to date, construction and repair work at 11,300 residential and non-residential buildings has already been completed.

Trend presents the video from Fuzuli and Jabrayil districts as below. 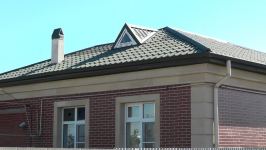