He made the remark during his speech at the session dedicated to the 'Heritage and cultural diversity in times of crisis' topic, which is being held in Mexico City as part of the Mondiacult 2022 World Conference.

Karimov drew the attention of the event participants to the ethno-cultural genocide which was committed by Armenia during the occupation of the territories of Azerbaijan for almost 30 years.

The minister noted that during the occupation, as a result of unprecedented systematic and targeted actions against the cultural heritage of Azerbaijan, numerous mosques, historical monuments, and various cultural institutions were completely destroyed.

He also noted with regret that international organizations were silent regarding these acts of genocide of the country's historical and cultural heritage.

He also informed about the global appeal on ‘Peace for the sake of culture’, an initiative which has been put forward by Azerbaijan since 2008 within the framework of the Baku process promoting intercultural dialogue.

During the session, the minister also read a statement on behalf of the countries of the Non-Aligned Movement (NAM), which is chaired by Azerbaijan. The statement of the NAM countries has condemned all forms of racism, racial discrimination, xenophobia and intolerance, and noted the importance of national, regional and international initiatives to protect cultural heritage. 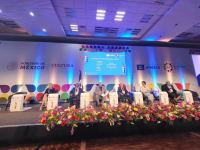