Employers throttled back on layoffs in May and cut the fewest jobs in any month since the financial crisis erupted last fall - raising the brightest hope yet that an economic recovery will take hold later this year, AP reported.

But with companies still reluctant to hire, the nation's jobless rate rose to a quarter-century high of 9.4 percent, and it likely will keep rising into 2010, possibly within striking distance of its post-World War II peak of 10.8 percent.

The economy shed 345,000 jobs in May, the Labor Department said Friday - half what it was losing in a month at the start of the year. But the report also underscored how hard it has been for America's 14.5 million unemployed to find new jobs.

Companies probably won't ramp up hiring until they feel sure a recovery is here to stay. Still, considering the damage the recession has wrought - 6 million jobs lost since December 2007 - it was encouraging that employers cut far fewer jobs in May.

The 345,000 jobs lost was down sharply from 504,000 in April, and an even bigger improvement over the average of nearly 700,000 jobs lost monthly during the first quarter of this year.

"The light at the end of the tunnel just got a lot brighter," said Nigel Gault, chief U.S. economist at IHS Global Insight.

But not so bright that economists expect more employers to start hiring again this year. Economists expect the pace of layoffs to keep tapering off, but they don't think the economy will begin to create jobs steadily until late next year at the earliest.

"Payrolls are learning to crawl but far from walking," said Michael Feroli, economist at JPMorgan Economics.

Stocks rallied on the better-than-expected news, but then surrendered most of the gains. The Dow Jones industrial average made a brief foray into positive territory for 2009, then pulled back to close up about 13 points at 8,763.13.

The job losses was the fewest since September and the fourth straight month in which the pace of layoffs slowed. In another heartening note, job losses for March and April turned out to be 82,000 less than the government had reported.

"This tide is turning," said Richard Yamarone, economist at Argus Research. "We expect this trend of slower job loss to continue throughout the year."

With no place for the out-of-work to land, the unemployment rate bolted to 9.4 percent from 8.9 percent in April. It was the highest rate since August 1983.

Hundreds of thousands of people, perhaps feeling more confident about their job prospects, streamed back into the labor force last month looking for work. That was a factor in the jobless rate's rise, economists said.

Labor Secretary Hilda Solis called the uptick in unemployment "unacceptable" and pledged to bring it down by helping the unemployed get new skills or training.

Including laid-off workers who have given up looking for new jobs or have settled for part-time work, the so-called underemployment rate would be 16.4 percent in May, the highest on record dating to 1994.

And the number of people out of work six months or more rose to nearly 4 million in May, a record and triple the total from when the recession began.

Dan Blatt, 37, who found a retail job in January after being laid off in October, is one of the lucky few. "I'd be frantic if I didn't have anything now," he said while attending a job fair in New York and looking for something even better.

To cut costs and perhaps avoid imposing further layoffs, employers trimmed workers' hours in May. The average work week fell to 33.1 hours, the lowest on record dating to 1964.

Federal Reserve Chairman Ben Bernanke repeated his prediction this week that the recession will end this year, but again warned that any recovery will be gradual.

Against that backdrop, many economists say the jobless rate will hit 10 percent by the end of this year and will keep rising into 2010. Some economists think it could near 11 percent. The highest since World War II was 10.8 percent at the end of 1982.

"Let me be very clear: A lower job-rate loss is not our goal," Vice President Joe Biden said. "`Less bad' is not how we're going to measure success."

Biden said he will join Obama on Monday in seeking to put more juice into the president's stimulus effort, including higher spending on public works projects. Biden did not provide details.

Solis and some economists credited the stimulus with helping to reduce layoffs in May. But other analysts said the benefits of the stimulus wouldn't really kick in until later this year or more likely next year.

Education, health care, leisure and hospitality were among the industries adding jobs.

The Fed says unemployment will remain elevated into 2011, with a tepid economic recovery. The job market may not return to normal - meaning a roughly 5 percent unemployment rate - until 2013, economists say.

Still, evidence is mounting that the recession is letting up, with fresh signs emerging earlier this week. The number of people drawing continuing unemployment benefits dipped for the first time in 20 weeks, and first-time claims also fell. Builders are boosting spending on construction projects, and home sales are somewhat firmer.

But ripple effects from the twin bankruptcies of General Motors and Chrysler could muddy the job market this month. During war, they wanted to introduce sanctions against us - President Aliyev 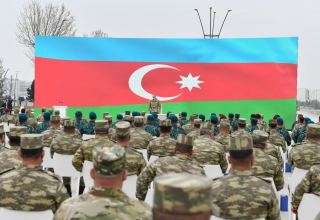 President Aliyev on transfer of Irevan to Armenia: I condemned this decision, we should not obscure history