It was noted at the meeting that Azerbaijan attaches special importance to cooperation with China in the transit-transport sphere and is interested in its development. It was noted that thanks to the Silk Road, close trade and humanitarian ties between the countries have an ancient history. It was also stressed that by expanding cooperation with countries as part of the One Belt One Road (OBOR) initiative, Azerbaijan is carrying out continuous activities to develop the TITR.

During the meeting, issues of encouraging joint measures to support the TITR, expanding cooperation between the relevant railway structures, the creation of a working group for the development of transport links, etc. were discussed.

At the meeting, an exchange of views took place on the creation of joint ventures in the fields of machine engineering, metallurgy, pharmaceuticals in the industrial parks of Azerbaijan and the expansion of mutual investment activities.

During the meeting of the Azerbaijani delegation with director of the National Bureau of Statistics of China and Vice Chairman of the National Development and Reform Commission Ning Jizhe, the importance of encouraging the TITR in China was noted, and the development of cooperation in transit-transport, industrial, agricultural and other fields was discussed. 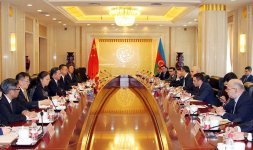