The company became the first official telecommunication and broadcasting partner of the football club in the CIS, as a result of which fans of "Manchester United" in Azerbaijan, as well as 2.6 million Bakcell subscribers will get access to unique content of the football team.

Bakcell will offer a special package of mobile services to its subscribers within the partnership.

Within the project Bakcell will have a right to transmit the football club's official TV channel MUTV in Azerbaijan.

Football Club "Manchester United" ranks first in the ranking of the most expensive sports teams according to Forbes.

Forbes estimates the value of "Manchester United" at $2.23 billion. 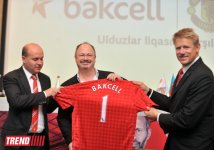