Reconstruction of highway connecting 3 villages under completion in Azerbaijan (PHOTO) The reconstruction of a highway connecting three villages is being completed in Azerbaijan’s Kurdamir district, Trend reports referring to the Azerbaijani State Agency of Automobile Roads.

"The volume of work being carried out under the leadership of Azerbaijani President Ilham Aliyev to modernize the roads in accordance with the adopted state programs for the development of districts is growing every year,” the agency said. “The work of the state agency in Kurdamir district as part of the reconstruction of the Arab Gubali-Chol Gubali-Maharramli highway with a length of 18 kilometers is on the last stage."

“The settlements, starting from the 170th kilometer of the Baku-Alat-state border with Georgia, cover three villages, namely, Arab Gubali-Chol Gubali-Maharramli in which about 4,000 people live,” the agency added.

"The steps have been taken to build a new road surface 10 meters wide to restore the deformed surface of the highway with a length of 18 kilometers," the agency said.

“The asphalt is being paved,” the agency added. “A coarse-grained structure with a thickness of seven centimeters is made from the lower layer of the road surface while from the upper layer - five centimeter-fine-grained asphalt concrete surface.”

As part of the project, the work was also carried out to replace and install new water pipes that are in an unusable condition. For this purpose, round reinforced concrete pipes of various diameters were used.

To ensure the normal movement of vehicles on the roads, the construction of bus stops and the installation of road signs are envisaged.

First of all, the implementation of these measures will ensure comfortable conditions for the population living in Arab Gubali-Chol Gubali-Maharramli villages. 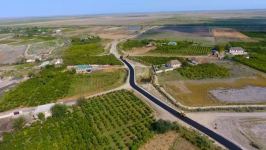