Society Materials 12 June 2013 17:29 (UTC +04:00)
Establishing a certain bridge between the country and religious bodies is one of our organization’s main tasks, head of the Azerbaijani State Committee for Work with Religious Organizations Elshad Iskandarov said. Establishing a certain bridge between the country and religious bodies is one of our organization's main tasks, head of the Azerbaijani State Committee for Work with Religious Organizations Elshad Iskandarov said.

"The representatives of the religious communities, faithful social contingent are the flesh of the Azerbaijani people, our citizens and part of our society's flesh," he said during an interview with Trend. "As the country is obliged to represent the interests of the whole society, I think it is wrong to methodologically speak about the need to establish some additional bridges - whether between the society and the country or the society and its separate part."

"The matter may rest on feedback, channels for taking in feedback have been established," he said. "Our communities know that if any non-standard situation occurs, one can apply and we will find a solution together. Let's say, the misunderstanding at the Juma Mosque Sumgayit; I think this incident is one of the incentives."

"One of the new trends is the international promotion of "the Azerbaijani model of religious tolerance," he said.

"Tolerance is our national heritage," he said. "But it is untrue that this property will be known worldwide if it is improperly and inconsistently presented. There is the world fierce competition in this area and all other areas of the market of ideas and ideological products."

"The big breakthrough in this area comes from the Heydar Aliyev Foundation and its president, Azerbaijani First Lady Mehriban Aliyeva which promotes Azerbaijani culture abroad, because our spiritual values ​​are inextricably connected with national history and culture," he said. "As a result of this work, Azerbaijan is deservedly considered a platform of an intercultural dialogue around the world."

"The State Committee's task is to work out the issues of an inter-religious dialogue as an important component of intercultural and inter-civilizational dialogue. "Thus, the creation of the National Center for Tolerance upon the initiative of Vice-President of the Heydar Aliyev Foundation Leyla Aliyeva, activities in such significant world locations as the House of Lords, the European Parliament, currently expected UNESCO, such centers of the Muslim world as Istanbul, Cairo, Rabat are of great importance for the promotion of the national model of tolerance."

"Producing real results is important because real results are what we talk about and consider natural: But this must be conveyed to Western audience and readers in clear language," he said. "We are currently working on an interesting project in this area, namely, a documentary film and preparation for the exhibition by famous photographer Reza Deghati about the history of an inter-religious dialogue and tolerance in Azerbaijan." 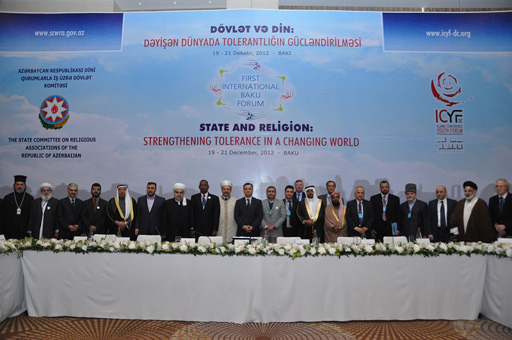 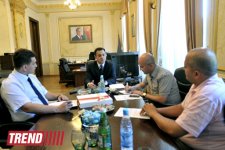