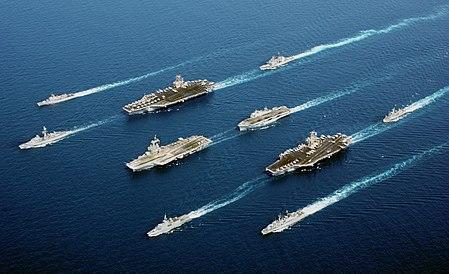 Speaking in Brussels Tuesday at NATO headquarters, Adm. James G. Foggo announced, "The aircraft carrier USS Harry S. Truman and its striker, including its ships and aircraft, will participate in Trident Juncture." Foggo is a commander in the US Navy and is the chief of NATO naval forces.

The Trident Juncture will feature military participation from all 29 NATO members and will include cooperation from Sweden and Finland. According to Foggo, the exercise has three themes, known as the three D's: "NATO is a defensive alliance, Trident Juncture demonstrates our credible capability, and together we deter potential adversaries."

The drills will take place in Norway from October 25 through November 7, according to NATO officials. In sum, approximately 50,000 personnel are expected to train in the drills.

When asked about the drills' proximity to Russian borders, Norwegian Lt. Gen. Rune Jakobsen said, "The core exercise area is more than 1,000 kilometers from the Russian border, and air operations could take place up to 500 kilometers away from the border, so there should not be any reason for the Russians to get scared or see this as something else than a defensive exercise."

The USS Truman was previously stationed in the Eastern Mediterranean Sea conducting operations against the terrorist group Daesh.