As of today, $1.1 billion have been invested in Azerbaijan's economy through investment tenders, Rafig Jalilov, deputy chairman of Azerbaijan’s State Committee on Property Issues, said Nov. 23.

He was addressing a conference held as part of the international real estate and investments exhibition in Baku.

Volume of the domestic production rose by 1.5 billion manats thanks to these investments, according to him.

Around 47,000 industry, trade, transportation and other state facilities, as well as non-residential facilities and vehicles have been privatized until today, Jalilov said.

He added that almost 1,600 middle and large enterprises have been transformed into joint-stock companies and privatized.

More than 250,000 people became owners of the shares of state-owned facilities, according to Jalilov.

He went on to add that over 300,000 new jobs have been created in Azerbaijan thanks to privatization. 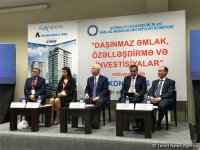