Administrative buildings of military prosecutor's offices have been commissioned in Azerbaijan’s Kalbajar and Gubadly districts, previously liberated from Armenian occupation, Trend reports with reference to the Prosecutor General's Office of Azerbaijan.

As part of the trip, the members of the delegation took part in the opening of the administrative buildings of Kalbajar and Gubadly military prosecutor's offices.

The prosecutor general met with the staff of these Prosecutor's Offices, gave instructions and recommendations related to their activity.

As part of the trip, the members of the delegation met with servicemen of the military unit in Kalbajar district and the military unit of the State Border Service in Gubadly district, reviewed the conditions of their service and life.

The members of the delegation also met with the servicemen being treated at a mobile hospital. 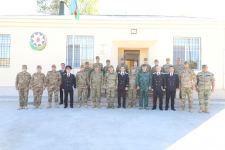