Society Materials 7 July 2011 17:26
The event dedicated to opening the Turkmen literature sector in the Mirza Fatali Akhundov National Library and transferring a collection of books on literature, culture and history of the Turkmen people, has been held in Baku today. The event dedicated to opening the Turkmen literature sector in the Mirza Fatali Akhundov National Library and transferring a collection of books on literature, culture and history of the Turkmen people, has been held in Baku today.

"All spheres actively develop thanks to the efforts of the leaders of Turkmenistan and Azerbaijan," Turkmen Ambassador in Azerbaijan Toyli Komekov said. "The cooperation in the broadest sense of the word is carried in the economy and the field of humanitarian contacts, culture."

We are pleased that our relations develop in the most favorable scenario, the ambassador said.

Azerbaijan and Turkmenistan also cooperate within the international organizations in promoting peace and stability in the region, as well as global security, Komekov said.

"Turkmenistan has become a country with a high level of economic development," the ambassador said. "It actively implements the constitutional, democratic and social reforms in the era of new revival thanks to the efforts of the Turkmen leader. Meanwhile, these achievements would be impossible without the revival of the spiritual foundations of the nation."

The ambassador said that the study of history and culture in Turkmenistan is inextricably linked with the name of the Turkmen President - a prominent scholar and political activist.

The Turkmen president attaches much importance to the history that creates an inextricable link between the generations.

"The Turkmen president has done much to preserve and restore historical and cultural national heritage," the ambassador said. "The Turkmen leader gives priority to the cooperation with foreign countries in science and culture."

Today's event points to the friendly relations between the two countries, the diplomat said.

He said that this is the second event conducted by the embassy together with the library this year. The previous event was devoted to the presentation of the works by great Turkmen poet Andalib in Azerbaijani.

Komekov thanked the government and Azerbaijani people for support rendered by the diplomatic mission of his country in Baku.

The embassy delivered more than 40 books in English, Russian, Turkmen and Azerbaijani to the library. 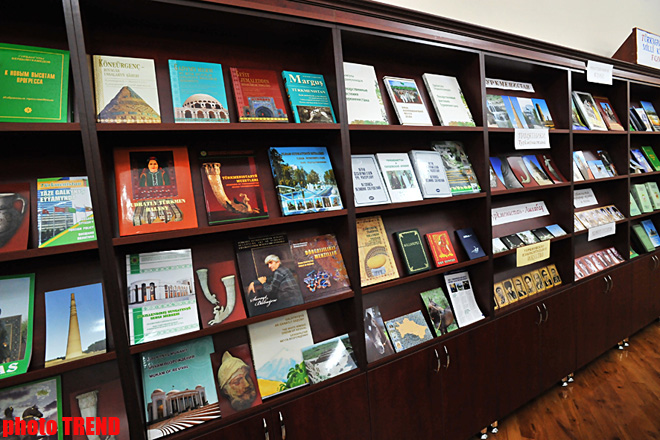