The chairman of the session, the Minister of Culture of Azerbaijan Abulfaz Garayev, said that seven nominees of five candidate files are inscribed on the World Heritage List. “New serious discussions await us,” he said.

During the meeting on July 6, the nomination of Dilmun mounds in Bahrain was discussed. After discussions, the nomination submitted by the country was included in the World Heritage List.

The chairman congratulated Bahrain and stated that after accepting this nomination, the number of monuments on the World Heritage List reached 1100.

The following discussions were on the Budj Bim cultural region in the southeast of Australia, that has four types of relief and6,600-year history. Hungary, China, Spain, Norway and Azerbaijan supported this nomination, which was eventually added into the list. The Australian delegation thanked everyone for supporting their nomination.

The 43rd session of the UNESCO World Heritage Committee is held till July 10, 2019. 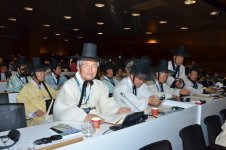