Business Materials 6 December 2012 14:15 (UTC +04:00)
Today Azerbaijan has a powerful infrastructure system, thanks to which it plays an important role in ensuring Europe’s energy security and acts as a reliable partner for it, Azerbaijani Deputy Foreign Minister Khalaf Khalafov said during his speech at the Caspian Forum in Istanbul on Thursday. 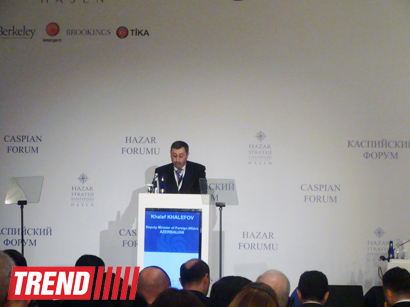 Today Azerbaijan has a powerful infrastructure system, thanks to which it plays an important role in ensuring Europe's energy security and acts as a reliable partner for it, Azerbaijani Deputy Foreign Minister Khalaf Khalafov said during his speech at the Caspian Forum in Istanbul on Thursday.

The "Contract of the Century" signed in 1994 served to opening of a new page in oil and gas sphere in Azerbaijan. Since 1995, investments worth over $120 billion have been made in Azerbaijan's economy," Khalafov said.

Building of friendly relations and establishment of cooperation with neighboring countries is the basis of Azerbaijan's foreign policy.

According to Khalafov, ensuring peace and security, as well as sustainable economic development in the Caspian region should be the key goal.

He said a progress has been observed in convergence of positions on the status of the Caspian Sea in recent time.

"Azerbaijan, Kazakhstan and Russia have reached an agreement, and we hope that there will be an agreement with Iran and Turkmenistan. Azerbaijan attaches great attention to the ecology of the Caspian Sea," Khalafov said.

Azerbaijan is ready to contribute to the implementation of the Trans-Caspian gas pipeline, Khalafov underlined.

"Azerbaijan is ready to provide its territory for transit of the Central Asian gas," he said.

Trans-Caspian gas pipeline with length of about 300 kilometres will be laid from the Turkmen coast of the Caspian Sea to Azerbaijani, where it will be linked to the Southern Gas Corridor.

During his speech Khalafov also touched upon the Nagorno-Karabakh conflict.
"For over 20 years, Azerbaijan has suffered from occupation of 20 percent of its territories by Armenia, as a result of which one million Azerbaijanis became refugees and IDPs. Armenia does not observe decisions taken by international organizations. If, we want to see the Eurasia stable, then it is necessary to end the occupation based on international norms," Khalafov said.

The role and importance of the Caspian region are discussed in the Caspian forum, which is organized by Caspian Strategy Institute and held in Istanbul on Dec.6.