The sanction against CBI and Iran's petrochemical industry was adopted in a unilateral move by the US, Canada and Britain outside the UN Security Council as other council members, specially Russia and China, had earlier warned against any fresh punitive measure, including sanctions, against Iran.

They throw Molotov cocktails at the embassy building and as a result it caught fire. 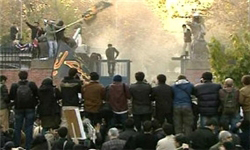