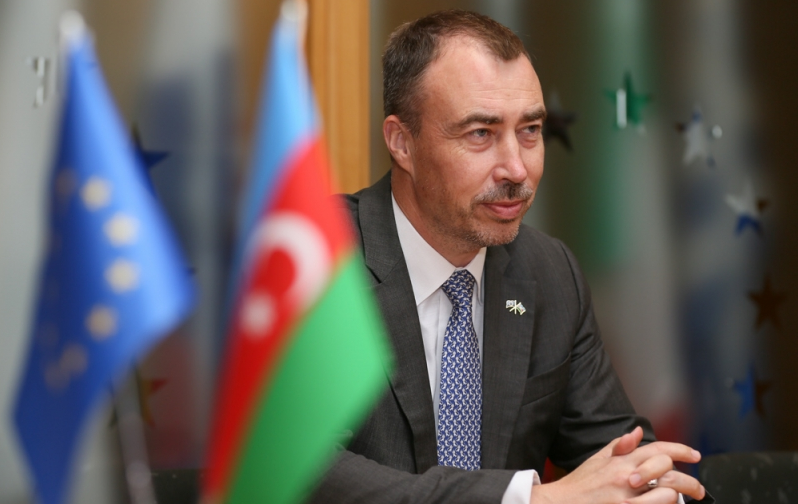 BAKU, Azerbaijan, May 26. The EU is ready to increase its support to efforts aimed at establishing peace in South Caucasus, EU Special Representative for the South Caucasus and the crisis in Georgia Toivo Klaar told Trend in an interview.

Klaar noted that the meeting that took place on May 22 was the third such encounter between the leaders of Azerbaijan, Armenian and the European Council in Brussels since December 2021.

“As noted by President Charles Michel, this meeting allowed for frank and productive exchanges on all issues on the agenda. The EU welcomes the strong commitment of Armenia and Azerbaijan to this format. There is a lot of work to be done over the coming weeks before the leaders again reconvene for another trilateral meeting this summer,” Klaar said.

Klaar emphasized that several concrete outcomes were reached on May 22, namely on the organization of the first joint meeting of the Armenian and Azerbaijani border commissions on the inter-state border – which took place on May 24 between the Armenian and Azerbaijani Deputy Prime Ministers, but also regarding agreements on the principles governing transit between western Azerbaijan and Nakhchivan, and between different parts of Armenia via Azerbaijan, as well as international transport through communications infrastructure of both countries. On the latter, the leaders agreed on principles of border administration, security, land fees but also customs in the context of international transport.

On the future peace agreement between Armenia and Azerbaijan, the leaders tasked their teams to advance discussions and ensure progress in the coming weeks.

“Looking at the progress I just referred to, I strongly believe that the leaders share a vision for sustainable peace in the South Caucasus. The Brussels meetings are an important element in helping to create the conditions necessary for the sides to move closer together,” he said.

In parallel to the meetings themselves, Klaar said, it is important that the sides, take steps needed to prepare the populations for long-term sustainable peace; this needs to include public communication.

“The EU welcomed the remarks made by Armenian Prime Minister Nikol Pashinyan in Parliament on 13 April and also recent positions expressed by Azerbaijani President Ilham Aliyev on the need to turn the page of enmity and ensure a safe and positive future for all conflict-affected populations on the ground. Much more can and needs to be done, but I believe that we are on the right track and will see more concrete understandings reached in this area too,” he added.

Klaar emphasized that the EU welcomes all efforts aimed at bringing long-term sustainable peace to the region.

“In addition to the Brussels format, there are also other parties, other actors, engaged in helping the search for a comprehensive solution acceptable to both sides. We all base ourselves on the conditions established by the Russia-brokered ceasefire statement of November 2020. And I already said in the past that the high-level agreements that were reached in Moscow and Sochi are going in the same direction as we are. Our efforts are not mutually exclusive, quite the contrary,” he said.

He pointed out that any peace process tends to be accompanied by speculations - this is normal.

“But we also hear some statements that do not contribute to decreasing tensions, which we regret. Memories of the 30-year-long conflict are still alive in both societies, including the war of the 1990s and the more recent one, in 2020. There is a need to heal the wounds and restore confidence between the different communities, which cannot happen at the expense of one side or the other,” he said.