Society Materials 17 May 2011 15:50
Azerbaijan is a major &quot;component&quot; in space exploration and the event in Baku today is a good reason to value the country's work done in space exploration, Russian Ambassador to Azerbaijan Vladimir Dorokhin said at a meeting of the Azerbaijani National Aviation Academy (ANAA). A delegation consisting of cosmonaut Sergey Treshev and representatives of the Russian Federal Space Agency are visiting Azerbaijan as part of activities dedicated to the 50th anniversary of Yury Gagarin's space flight on May 17-19.

The visit is organized by the Russian Federation Embassy and the Federal Agency for Commonwealth of Independent States, Compatriots Living Abroad and International Humanitarian Cooperation (Rossotrudnichestvo).

On May 17, the National Aviation Academy hosted the delegation's meeting with the public, which was attended by Embassy representatives, the National Academy of Sciences, National Aerospace Agency, youth associations, and diaspora organizations.

Dorokhin said Azerbaijan pays great attention to space studies, has an impressive scientific base, and a National Aviation Academy with a separate space faculty.

"I think it is the right policy of the authorities. As Russia is a space power with great traditions, there is a large scope for cooperation between the two countries," he said.

Dorokhin sterssed that today's meeting will become an important element for cooperation between Azerbaijan and Russia.

"I'm glad I was provided with an opportunity to visit your beautiful city and this academy within the celebration of this event, and I have the opportunity to talk with students and faculty," he said.

The delegation will visit Gabala and Shamakhi on May 18-19 where meetings will be held with the public and students.

An exhibition will be held and documentary films will be screened about space.

He said after gaining independence, Azerbaijan has given a new impetus to the development of the space sphere while cooperating with Russia in this direction. 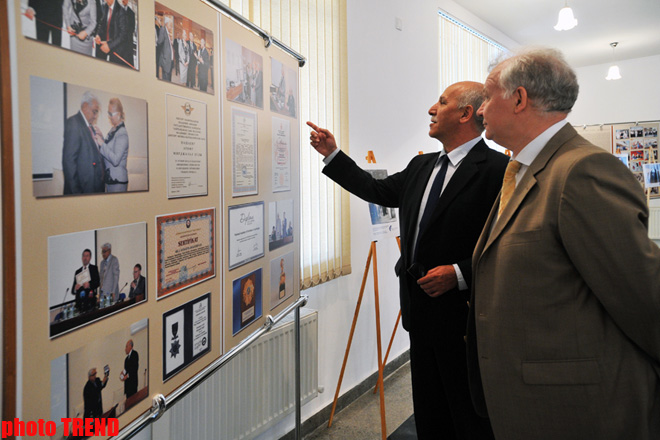