The gymnasts scored 26.890 points. At the moment they are taking the third intermediate place in qualifying.

The 28th FIG Acrobatic Gymnastics World Championships is being held at the National Gymnastics Arena in Baku from March 10 through March 13.

Some 170 gymnasts from 17 countries are participating in the championship, which is being held in Baku for the first time.

During the 28th FIG Acrobatic Gymnastics World Championships, Azerbaijan is being represented by European champions among juniors Daniel Abbasov and Murad Rafiyev, winners of international tournaments Sabir Aghayev and Mehriban Salamova as part of the men's pairs, as well as silver and bronze medalists of the European Championship Aghasif Rahimov and Raziya Seyidli. 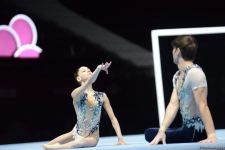