The unique in its kind project - Mobile Eye Clinic launched on June 1, 2011 on International Children's Day at the initiative of Azercell Telecom successfully continues its operation.

This project, primarily intended for prevention of eye diseases and complex examination of children deprived of parental care, also caters to the elderly and the poor. As part of regular visits to orphanages and the elders' shelter, Mobile Eye Clinic's doctors examined 36 residents of Cardio-rheumatology Sanatorium number 39 in Lokbatan on July 2. In addition, Azercell's Mobile Eye Clinic has visited the shelter of refugees from Lachin and Zengilan regions in Sumgait on July 3. Some 36 people in total - 31 children and five adults have been examined by the clinic.

The Clinic has already been to many boarding schools and orphanages in Baku. In addition, the doctors also examined children with vision problems arriving from the orphanages of the Ganja, Lankaran, and Gusar regions, as well as children living in the camps in Nabran, Guba and Khachmaz. During 2013, the Mobile Eye Clinic examined 563 people, out of which 519 were children and 44 were seniors.

In spite of the hot summer season, Azercell's Mobile Eye Clinic continues its intensive operation for the benefit of all those who are in need of its support. On July 9, the Clinic will visit a refugee shelter in the Gala settlement and examine its residents.

Four years ago Azercell also commissioned a Mobile Dental Clinic. This project has gained immense popularity in our country, and for years of operation more than 2,000 children benefited from its services. Azercell's initiative has proved so popular that later some other companies also launched similar mobile clinics and began site visits with check-ups.

With 51 percent share of Azerbaijan's mobile market Azercell's network covers 99.8 percent of the country's population. The number of Azercell's subscribers reached 4.5 million people by late 2013. In 2011 Azercell deployed 3G and in 2012 the fourth generation network - LTE in Azerbaijan. The company is the leader of Azerbaijan's mobile communication industry and the biggest investor in the non-oil sector. Azercell is the part of the TeliaSonera Group of Companies, which has subsidiaries in 17 countries with total number of 186 million subscribers and 27,000 employees. 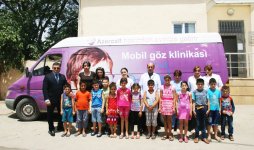