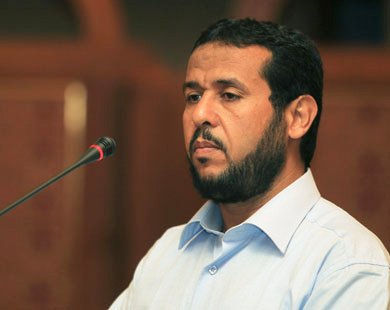 The chief of the Libyan rebels' military council in the capital Tripoli, Abdel Hakim Belhaj, has denied reports about rifts among the rebels after they ousted long-standing ruler Moamer Gaddafi in an interview with the German Press Agency dpa.

The head of the rebels' Transitional National Council (TNC), Mustafa Abdel Jalil, had reportedly failed to convince 30 senior rebels in Tripoli to operate under Belhaj's command.

"The whole matter is that some different views were made, which is normal, given the freedom prevalent now in Libya," Belhaj, a leading Islamist in the North African country.

Belhaj spent six years in Libyan jails where he said he was maltreated and tortured.

He told dpa that his "history of struggle" against the Gaddafi regime qualified him to be chief commander in Tripoli.

Meanwhile fighting was raging between rebel forces and Gaddafi loyalists in the port town of Sirte, according to broadcaster Al Jazeera.

Pro-Gaddafi fighters shelled the port, while rebels claimed they controlled over 80 per cent of the town, the Doha-based television station reported.

The rebels have been trying for more than two weeks to wrest control over Sirte, Gaddafi's hometown.

"The humanitarian situation in Sirte is very difficult," Hesham al-Khudari, the deputy chairman of the Red Cross, told Al Jazeera on Sunday.

He added that the town's residents, caught in the crossfire, were suffering a shortage of food and medical supplies.

The TNC has given civilians until Sunday night to leave the town before the rebel forces start a large-scale attack.

Meanwhile, a rebel official said Sunday that the rebels had seized chemical weapons in the southern town of Sabha.

"Nine tonnes of artillery shells containing mustard gas were found inside a warehouse in the unpopulated area of Al Shaata in Sabha," Hassan al-Saghir, a member of the TNC, told the Arabic US-based broadcaster Radio Sawa.

He added that the weapons had been brought into Libya by the Gaddafi regime from an Asian country, which he did not name.

"Contacts have been made with some international sides and organizations to dispose of these weapons in a safe way according to world standards," he added.

Western countries, including the United States, have recently voiced worries over the proliferation of conventional and non-conventional weapons in Libya after the Gaddafi regime was ousted in late August.