An annual charity fair, traditionally organized by Zagreb's International Women's Club, was held in Zagreb under the patronage of Croatian First Lady Tatjana Josipović, the Azerbaijani embassy in Croatia said on Monday.

Along with the Azerbaijani embassy, the embassies of more than 30 countries, accredited in Croatia, including Russia, US, China, France, Great Britain and Germany, as well as Zagreb's leadership and the Croatian public attended the event.

The purpose of this annual charity fair is to contribute to a charity fund established to assist children, as well as for the member-states to present their culture, art, cuisine, customs and traditions of their people.

The Azerbaijani embassy in Croatia takes part in the fair every year. Souvenirs and objects reflecting the art and traditions of Azerbaijan were demonstrated at the fair. The information about the first European games, to be held in Baku in 2015, will be delivered. Fair visitors obtained books, magazines, maps and other materials related to tourism, culture and the art of Azerbaijan.

It should be stressed that as in previous years, this year Josipović has also visited the stand of Azerbaijan, became familiar with the exhibits and shared her impressions.

Azerbaijan's stand was one of the most visited at the fair. 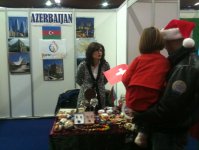 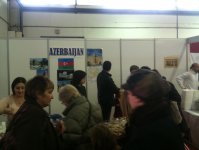