With the organizational support of Azerbaijan’s Embassy in Ukraine, a solemn ceremony of opening Azerbaijan’s first Center of Culture and Information took place in Kharkiv city Nov. 8, Trend reports.

At the beginning of the event, the national anthems of Azerbaijan and Ukraine were played. Then the flags of both countries were raised to the height of 12 meters.

Azerbaijani Ambassador to Ukraine Azer Khudiyev, calling the opening of the Center a historic event, said that the rise of the Azerbaijani flag in Ukraine’s second biggest city on the eve of November 9 - State Flag Day - is a source of pride.

The Azerbaijani flag flying there will enhance the sense of national identity, ideas of independence and solidarity among Azerbaijanis living there, the ambassador said.

Khudiyev noted that on the instructions and recommendations by Azerbaijani President Ilham Aliyev, a number of projects are being implemented to promote Azerbaijan’s culture and history in Ukraine. A significant contribution to this matter will be made by Azerbaijan’s Center of Culture and Information in Kharkiv, the ambassador added.

Khudiyev stressed that it is planned to open such centers in other Ukraine’s cities as well. He expressed gratitude to the mayor of Kharkiv for the support.

Head of the Office of Azerbaijan’s Ministry of Culture Fikret Babayev also spoke at the event. Babayev said that cooperation between Azerbaijan and Ukraine in the field of culture is at the highest level, as well as in all areas.

“The Azerbaijani state always supports any initiative to promote our culture in foreign countries,” the office head noted. “I believe that this center of Azerbaijan’s culture will be of particular importance for Kharkiv citizens and visitors, and will turn into a venue for cultural events.”

First Deputy Mayor of Kharkiv Igor Terekhov said that the opening of such a grandiose Culture Center on the eve of Azerbaijan’s State Flag Day has a special meaning, adding that the Center will further strengthen friendly relations between the two countries.

Next, Director of the Department of Economics and International Relations of the Kharkiv Regional State Administration Andriy Kolos and Director of Azerbaijan’s Center of Culture and Information, People’s Artist of Ukraine, sculptor Seyfeddin Gurbanov made speeches.

Then, a red ribbon was cut, symbolizing the official opening of the Center. The event continued with a concert program of Azerbaijani and Ukrainian artists.

A monument embodying the unshakable friendship of Azerbaijan and Ukraine, monuments of outstanding thinkers and historical figures of both countries, as well as various compositions have been installed on the territory of Azerbaijan’s Center of Culture and Information. 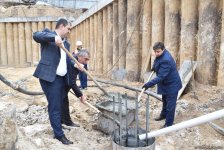