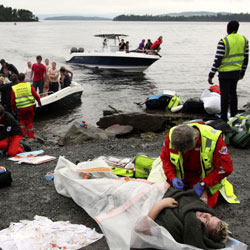 During the interrogation Breivik, who is believed to belong to right-extremist groups in eastern Norway, said it was he who organized the shooting spree from two different kinds of firing guns on the island, Dagbladet said.

Oslo police's spokesman told the paper the interrogation could take up to several days.

Witnesses, survived in the Utoya massacre, earlier said that there could have been two gunmen as they heard shootings, coming from "two different places on the island at the same time."

The spokesman said there is no information on the second gunman.

At least 98 people were killed in two separate attacks in Norway on Friday.

A massive explosion, that ripped through the government headquarters in Oslo, is reportedly killed seven.

The massacre at the summer camp, where about 700 people gathered on Friday, claimed the lives of over 80 with up to five still missing.

Breivik is also believed to have been one of those linked to the Oslo bombing. But he is unlikely to be linked to international terrorist organizations, police said.