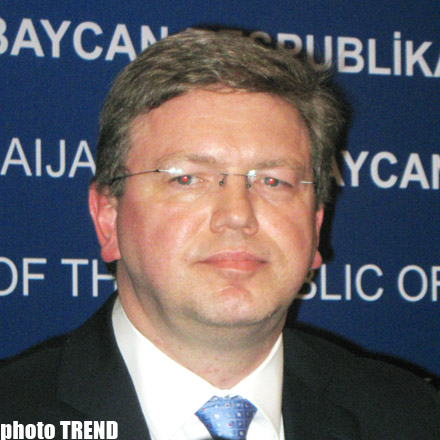 The negotiating directives for Association Agreements with the South Caucasus countries will be presented for formal adoption at the Foreign Affairs Council on May 10, said Štefan Füle, European Commissioner for Enlargement and Neighbourhood Policy.

"This will pave the way for the EU side to prepare for the launch of negotiations. These Agreements will allow for close political association between each of the partners in the South Caucasus and the EU, building on common values and shared principles," European Commissioner said in his speech, text of which was provided by the EU office in Baku.

According to the Commissioner, closely linked to the Association Agreements, the EU's offer to establish deep and comprehensive free trade areas is also an immensely important opportunity for those South Caucasus countries that have fulfilled the preconditions. Such agreements of economic integration will provide access to the EU market of 500 million consumers and will help increasing trade flows and investments, he said.

"It is clear that the demands are high from our partners in the South Caucasus. But so are also the EU's requirements on these partner countries to make sure that their legislation is in place and their administrative capacities strong enough to turn political ambitions into actual delivery of results," he said.

Füle said the Commission will provide technical and financial assistance to help the partners meet their objectives notably through the new Comprehensive Institution Building programmes that we are designing together with partners in the East.

According to the European Commissioner, in Azerbaijan, there was a shared ambition of political leaders to embark on a concrete dialogue on broadening the EU-Azerbaijan cooperation beyond the energy sector.

"We exchanged views on ways to modernise Azerbaijan, to diversify the economy and to strengthen development in the provinces. In this context, I called for further democratisation efforts and highlighted the importance of respect for human rights and fundamental freedoms," Füle said.