The rally is being held against the inadmissibility of Azerbaijani specialists to the territory, to monitor the illicit exploitation of the country's mineral resources. 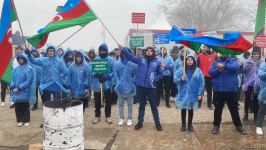