5-day International Youth Festival of Modern Muslim Culture has been successfully ended in Kazan city, Republic of Tatarstan, organized by the Ministry of Youth Affairs of the Republic of Tatarstan, Federal Agency for Youth Affairs of the Russian Federation, Tatarstan Youth Center "Selet" (Selet), Academy of Youth Diplomacy, Project Office for International Youth Cooperation in the wing of Russia-OIC, Kazan State University of Culture and Arts, Federal Agency for the Commonwealth of Independent States Affairs, Compatriots Living Abroad, and International Humanitarian Cooperation, in partnership with the Islamic Cooperation Youth Forum (ICYF), its Eurasian Regional Center (ICYF-ERC) and a number of other organizations.

At the event, which was attended by about 10 representatives from Azerbaijan, young people from Muslim countries demonstrated their skills in music, theater, folklore, choreography, visual arts and other areas of culture.

At the closing ceremony, Vusal Gurbanov, Acting Director General of the Eurasian Regional Center of Islamic Cooperation Youth Forum, thanked the co-organizers, in particular, Timur Suleymanov, the Minister of Youth Affairs of the Republic of Tatarstan, and Roza Ahmadiyeva, the Rector of Kazan State University of Culture and Arts. He also stressed the importance of holding such events in the OIC member states in the future.

It should be noted that, within the framework of the mentioned festival, the ICYF-ERC organized an event, dedicated to the 880th anniversary of great Azerbaijani poet and thinker Nizami Ganjavi. 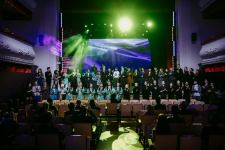