The next meeting of the heads of the World Bank (WB) and International Monetary Fund (IMF) will take place in Azerbaijan in July 2014, the Central Bank of Azerbaijan (CBA) reported on Monday.

The decision was made at a meeting of CBA Deputy Chairman Khagani Abdullayev and Director of the Bank's Department for Foreign Affairs Fuad Huseynov with heads of the group, held at the annual meeting of the WB and IMF Board of Governors in Washington.

CBA representatives held several meetings and took part in workshops and conferences organized by the IMF for delegations from the countries of the Caucasus region and Central Asia.

Moreover, the CBA delegation met with WB vice -president for Europe and Central Asia Laura Tuck. The portfolio of WB projects in Azerbaijan, a new strategy of partnership between the World Bank and the Central Bank of Azerbaijan, as well as other aspects of bilateral cooperation were discussed at the meeting. The WB Vice-President expressed gratitude to the government for assistance in the implementation of the bank's projects in Azerbaijan and stressed WB's interest in expanding relations. 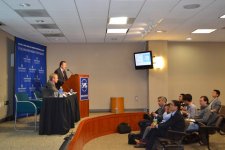