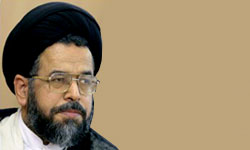 Iranian officials refer to extremist Sunni armed groups in particular in Syria and Iraq, as Takfiri.

On Feb. 8, a Takfiri terrorist was arrested in the country's south eastern borders, Alavi said, adding half kilogram of explosives and home-made bombs as well as a magnetic bomb and a remote control were seized from the arrested person.

Also a 4-member terror team which was planning to commit suicide attacks was identified and neutralzied in western borders on Feb. 24.

The election was held for the tenth round of the parliament and the fifth round of the Assembly of Experts on Feb. 26. Iranians went to the polls in over 1,063 constituencies.

Currently, the Parliament has 290 representatives, fourteen of whom represent the non-Muslim religious minorities. Women constitute about eight percent of the MPs in Iran.

A total of 4,844 hopefuls, including about 500 women, who were qualified among 12,000 registered candidates by the Guardian Council, were taking part in the rally to take the parliamentary seats.

The elected candidates will serve from May 3, 2016 for a four-year term.