President of the Republic of Azerbaijan Ilham Aliyev received a delegation led by Minister of Internal Affairs of Serbia Nebojsa Stefanovic Dec. 5.

The president expressed confidence that the visit of Stefanovic would be fruitful in terms of discussing cooperation between the two countries` relevant authorities and exchanging views over the development of bilateral relations.

Saying that Azerbaijan and Serbia maintain cooperation in numerous areas, the president said Azerbaijan was interested in developing this cooperation.

Emphasizing the two countries` constant support for each other in international organizations, President Aliyev said it was important in terms of expanding partner relations.

The president expressed his confidence that Azerbaijan-Serbia ties would continue to develop successfully.

Stefanovic praised high hospitality accorded to them in Azerbaijan. He said they were deeply impressed with Baku`s development in recent years.

The Serbian minister underlined the necessity of cooperation between relevant authorities of the two countries, noting that his visit was a good opportunity for doing concrete work to develop the bilateral relations.

Expressing his regret over the spread of terrorism in the world, Stefanovic highlighted the importance of joint fight against terrorism and organized crime.

The Serbian minister also emphasized the significance of information exchange between relevant bodies and trainings in terms of enhancing the bilateral cooperation. 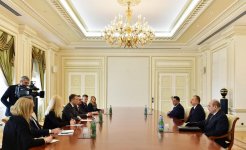