President of the Republic of Azerbaijan Ilham Aliyev has received Editor-in-Chief of The Business Year magazine Leland Rice and its Regional Director Betul Cakaloglu.

Rice stressed the importance of Azerbaijani President Ilham Aliyev's participation and his speech at the World Humanitarian Summit, which was recently held in Istanbul. He underlined Azerbaijan's role in strengthening the international cooperation and in global economic processes.

President Aliyev hailed the importance of the World Humanitarian Summit, saying it was the first international humanitarian event in this format and its agenda covered a wide range of areas.

Pointing to the international economic cooperation, the president highlighted the work done towards Azerbaijan's integration into the world economic system.

Betul Cakaloglu informed the president about the activities of the magazine.

Saying the magazine has been cooperating with Azerbaijan for nearly six years, she hailed the magazine's relations with a variety of continents and countries around the world.

Leland Rice said that the magazine named Azerbaijani President Ilham Aliyev "The World`s Person of the Year 2015", and presented the award to the president.

He said that President Aliyev was honored for his role in Azerbaijan's making significant contribution to ensuring energy security of Europe and diversifying energy sources, for establishing and realizing the Southern Gas Corridor project and its integral elements - Shah Deniz-2, TANAP and TAP projects, excellently organizing important international events, including the first ever European Games and showing the world big potential of Azerbaijan, the country's efforts made towards the creation of East-West and North-South transport corridors, Azerbaijan's becoming an international transportation and transit hub, providing practical support for the development of inter-civilizational and inter-cultural dialogue, hosting international humanitarian events for encouragement of multicultural values and other successful activities in ensuring peace and security in the region.

President Aliyev thanked The Business Year magazine for the award. He stressed the significance of regional cooperation in addressing the issues as economic diversification, energy security, multiculturalism, as well as in Azerbaijan's becoming a center of the international transport and investing in this infrastructure.

Underlining that the regional cooperation is based only on mutual trust, the president said that the mutual trust in its turn was established through the promotion of multicultural, religious and ethnic tolerance values.

President Aliyev thanked The Business Year magazine for promoting Azerbaijan and delivering the truth about the country to the international audience. 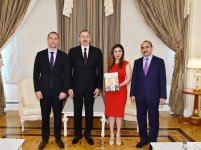